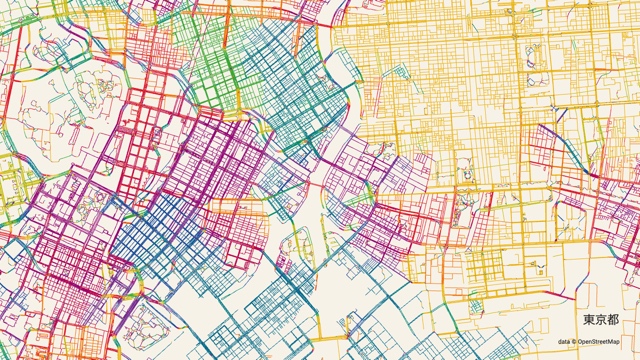 The direction of the road is sometimes slightly different between neighboring towns. I painted the streets in different colors depending on the direction to make it easier to see.

(This article is a machine translation of https://dailyportalz.jp/kiji/douro-hougaku-machi-no-dekikata) If you zoom in, this is what it looks like. The road is painted according to its direction.

The yellow area on the right is Koto-ku. The colorful area in the center is Ginza and Nihonbashi. The colors make it easy to see that the direction of the streets is slightly different in each city.

I wondered if I could do this kind of thing, and when I tried it, I was able to do it, and the results were interesting, so I decided to try it out in various places.

(The map in this article is based on data from OpenStreetMap. More details at the end) The first thing that impresses me about Tokyo is the fact that the roads in Koto-ku are oriented almost exactly north-south or east-west. In this map, such roads are painted in yellow, so Koto-ku is yellow.

This seems to be because a man-made river called the Onagi River was first drawn east to west in the Edo period. This is because of the water transportation to Chiba. The fact that the road is slightly tilted to the west instead of true north, is probably due to the gap between the compass north (magnetic north) and true north. It’s also nice that the grating is completely different in the east and west of the castle. It seems to be related to the fact that the east side is low and flat, while the west side is mountainous and has many ups and downs. As for Sapporo, look at an enlarged version of the central area first.

The road tilts to the west around the Sapporo Station. On the other hand, the road in the area called “Yamahana” in the lower part of the picture is yellow and faces true north. The angle of the road is slightly changed when you walk on the road, which is located behind Susukino. In a large area, the direction of the road is completely different in each city.

The Sousei River, a man-made river marked in light blue, follows the slope of Sapporo’s fan-shaped area. And the roads in the city center are built to face the Sosei River. In other words, the direction of the grid is determined by which way the ground under our feet is inclined. I think the situation is similar to Kotoni’s.

I want to take a quick look at it. Next is Yokohama. In a large area, the city of Yokohama is chaotic. That is to say, there is hardly any grid of streets. But only the center of the city is grid-like. It looks nice. The grid in the middle is a lowland area with several rivers running through it. The chaos above and below is the high ground. It may be said that the grid-like road is easy to be formed in the lowland. The one on the right of the center is Chinatown, which is partly yellow. If you walk here, you can see that the direction of the street is different only here. This discrepancy seems to originate from the former rice field. Isn’t Kyoto kind of cool? I might want one of these posters.

Most of the roads in Kyoto are yellow. That is to say, there are many roads along the true north or true east. However, if we zoom in, we can see that not all the roads are like that. The upper part of the image is green or purple in color, which is the road along the river upstream of the Kamo River. And as you approach the mountain on the right, you can see that the grid is broken. Does this mean that the terrain does not allow a grid? (I thought so, but not in San Francisco.)

It is interesting to note that Nijo Castle is slightly tilted to the east on the left side of the map. This is because the north of the compass tilts slightly to the east in Kyoto at that time. In Hateruma Island, a remote island in Okinawa, there are two different angles of the road. The first one is yellow, reflecting recently created fields, which are perfectly aligned to the north, south, east and west.

The center of the island is purple, and the grid is slightly rotated clockwise. Let’s zoom in a bit. This purple color corresponds to the house as well. The direction in this area is based on the direction of the monsoon winds. This is called “folk direction”. Finally, let’s take New York City. Everywhere here is a large grid, and the direction of the grid varies from place to place. It’s like Sapporo.

Where does this difference in orientation between the different districts come from? I’m not sure. Is it the topography? Or maybe it’s along some of the main lines they first pulled. Please let me know if you know about this. I enlarged the area around Central Park. The green line running vertically through the center is Broadway. To make it stand out, the hue is slightly changed.

Broadway was a street before this grate was built. The intersection with the lattice becomes a sharp angle, and sometimes a building with a very sharp angle is built there. The Flatiron Building seems to be the most famous such building.

The map in this article was drawn from a program by anvaka that draws roads based on data from OpenStreetMap with changes to color the roads.

A modified version of the program:
https://github.com/mitsuchi/city-roads